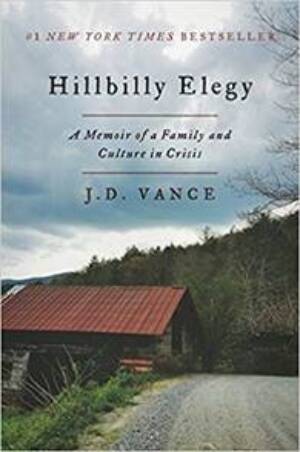 Hillbilly Elegy: A Memoir of a Family and Culture in Crisis by J.D. Vance, a graduate of Yale Law School. This book is about Vance’s tumultuous childhood in Appalachia, “surviving his mother’s drug addiction and a long series of hapless stepfathers” in a family where poverty “is the … tradition.” According to a New York Times book review, Vance offers “a compassionate, discerning sociological analysis of the white underclass that has helped drive the politics of rebellion.” The book also is controversial and provocative, assigning significant responsibility to his ‘hillbilly kin’ and their culture for their misfortunes.

2018-2019: The New Jim Crow: Mass Incarceration in the Age of Colorblindness

The New Jim Crow: Mass Incarceration in the Age of Colorblindness by Michelle Alexander, presents pages of statistics and legal citations on American criminal justice policies, comes at a time when “declining crime rates and exploding prison budgets have made conservatives and liberals alike more ready to question the wisdom of keeping nearly 1 in 100 Americans behind bars.” It also is controversial and provocative, arguing that the war on drugs and unequal enforcement of criminal laws have legalized old forms of discrimination regarding employment, housing, voting rights, educational opportunities, and other public benefits.

2017-18: Infamy: The Shocking Story of the Japanese American Internment in World War II

Infamy: The Shocking Story of the Japanese American Internment in World War II by Richard Reeves provides a powerful narrative about the 120,000 Japanese-Americans and aliens forced from their homes and into prison camps following the attack on Pearl Harbor. Reeves’ book passionately describes the experiences of individuals and families and invites reflection on the fragility of fundamental legal rights.

The Immortal Life of Henrietta Lacks by Rebeca Skloot is a fascinating exploration of issues touching medicine, healthcare policy and ethics, genetics and identity, property rights, race, and class. Best of all, it is a well-told story that is hard to put down once you’ve started.