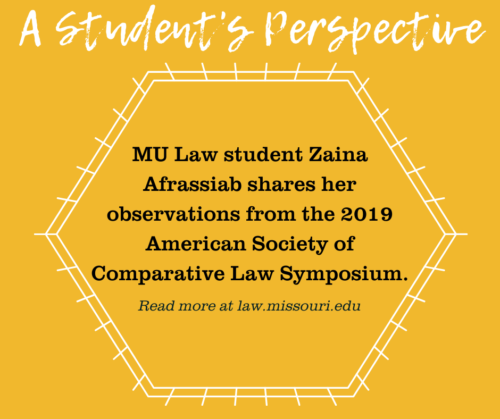 Thursday night’s reception, like the rest of the program’s events, was bustling with experts in the field of comparative law.

The reception began with introductory remarks from S. I. Strong, the Manley O. Hudson Professor of Law at the University of Missouri School of Law, who expressed gratitude for everyone’s attendance and the level of engagement, free idea-sharing, and lively discussions that had taken place earlier in the day.

Next, Professor Mary Stegmaier, MU’s Vice Provost for International Programs, discussed the University’s efforts to promote cross-cultural learning through exchange and study abroad programming. The Law School, for example, allows J.D. students who have completed the first or second year of law school to travel to South Africa and study alongside students from the University of the Western Cape. Courses include Comparative Issues in Criminal Justice Administration, Comparative Dispute Resolution, and Comparative Constitutional Law.

Professor Stegmaier shared a bit about the University’s efforts to expand programs like this and add additional programs, as well as make similar experiences available to undergraduate students. ASCL’s current President, Professor Rick Kay, then shared a bit about the Society, which publishes the American Journal of Comparative Law and brings together comparative law scholars yearly to present research and collaboratively examine comparative law issues.

The Society, which is recognized as the leading comparative law organization in the United States, is growing as more and more scholars realize the importance of cross-cultural and cross-national comparisons. Finally, Associate Dean Paul Litton commended ASCL members, including many MU Law faculty members and members of the Center for the Study of Dispute Resolution, for their recent accomplishments within the field.

The conference undeniably represented an impressive cross-section of legal experts and allowed them to network, pursue publication opportunities, and participate in timely and relevant discussions about comparative law.