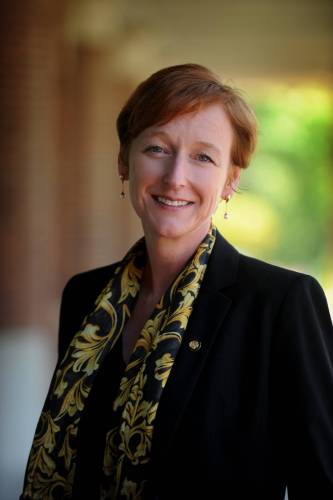 Lidsky, who joined the university in July 2017, is the first woman to be named dean of the law school. She has been widely lauded for her legal scholarship, enthusiasm for the law, mentorship of students and talent for generating and sustaining engagement within the school’s critical constituencies.

“Within a very short time after her selection [as dean], she consistently demonstrates the ability to toggle back and forth between various factions — faculty, students, alumni and donors,” a nominator said. “The poise and grace with which she moves through the complexity of her job is amazing.”

Acclaimed as a First Amendment scholar, Lidsky is a co-author of a well-known media law casebook and has published on issues including defamation, privacy, cyberbullying, and online incitement and threats. Supreme Courts in several states as well as courts in other nations have cited her work on anonymous speech.

She speaks frequently to audiences around the state and beyond, and her nominators praise her accessibility and the unflagging energy she devotes to her role and its demands — particularly notable during 2019, when she underwent chemotherapy, surgery and radiation for an aggressive form of breast cancer. During that period, she shared frequent updates as well as personal reflections about her experience on her 4,500-follower Twitter account.

“She’s been so open and inclusive, and without skipping a beat,” a nominator said of Lidsky, who now is cancer-free. “The way she’s managed her health care situation exemplifies leadership.”

Lidsky leads this year’s list of 53 honorees, which includes judges, in-house counsel, legal scholars and private practitioners from around the state, as well as outstanding students at Missouri law schools. Seven others of the Mizzou Law community are among the honorees.

The Leaders of Tomorrow are recognized for leadership, professionalism and passion for making a difference in the justice system or legal profession. 2L Carley Johansson is among this year’s honorees.

The Public Service Award recognizes women who work on behalf of a nonprofit organization, government agency or the judiciary; or have made their mark in education: Sarah Kerner, ’04, economic development director, City of Springfield; and Stephanie Wan, ’06, chief assistant prosecuting attorney, Greene County Prosecutors Office.

The Litigation Practitioner Award recognizes litigators who have made their careers in the courtroom – criminal or civil, representing plaintiff or defense: Megan N. Creson, ’16, Lowther Johnson Attorneys at Law; and Ida S. Shafaie, ’13, Armstrong Teasdale.

At the 22nd Annual Women’s Justice Awards event will be virtual on August 25. Since 1999, the awards have celebrated extraordinary women lawyers, law students, rising stars, public officials and others in recognition of the standards of professional excellence they’ve set for their peers.