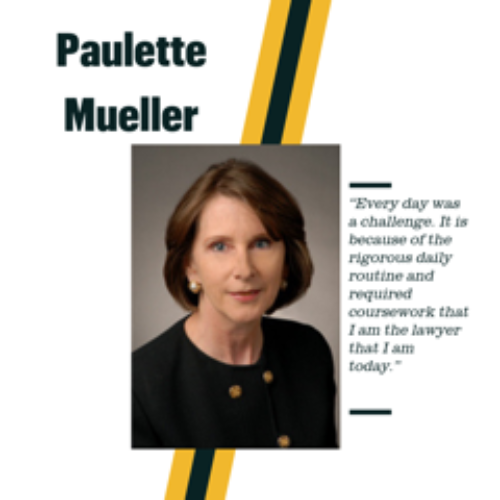 Paulette Mueller graduated from MU Law in 1980 and has practiced family, probate and guardianship law in Texas since 1981. Mueller was born in Jackson, Mo. in 1953 to MU Law Class of 1950 graduates Paul and Marybelle Mueller. She has had a fruitful career as an attorney and now practices at Underwood Perkins, PC in Dallas, Texas, serving as a Director and chair of the Family Law Section at the firm. Mueller largely attributes her success to her parents’ encouragement of her educational pursuits.

Entering the law school in 1977, Mueller was a member of one of the earliest graduating classes where the percentage of women reached into the double digits.

“From the first day we walked through the doors of Tate Hall, we knew it wasn’t going to be easy, and it wasn’t,” she said. “Every day was a challenge. It is because of the rigorous daily routine and required coursework that I am the lawyer that I am today.”

In 1987, she began working for Shafer and Mueller, PLLC and she remained as an attorney there for 22 years. Mueller was admitted to the Missouri Bar in 1980 and the Texas Bar in 1981 and has is admitted to practice before the United States District Courts in both the Eastern and Northern Districts of Texas and has been AV rated by Martindale Hubbell since the 1990s.

Her professional affiliations include:

Mueller says the rigorous training she endured as an MU Tiger prepared her for the challenges she has faced.

“Had our professors not invested themselves in each of us, we would not be competent attorneys sustaining our alma mater’s respected reputation,” Mueller said.

In her personal life, Mueller has taken the same fundamental values instilled both by her parents and her Mizzou education to create avenues of success.

“Outside of practicing law, the ability to meet a challenge and gave me the resilience and determination to find funding,  build a new sorority house, and remain involved on campus at SMU after raising two children with my husband Lewis Frazee,  each of who have carried forward the commitment to education begun by my parents, and grandparents.”