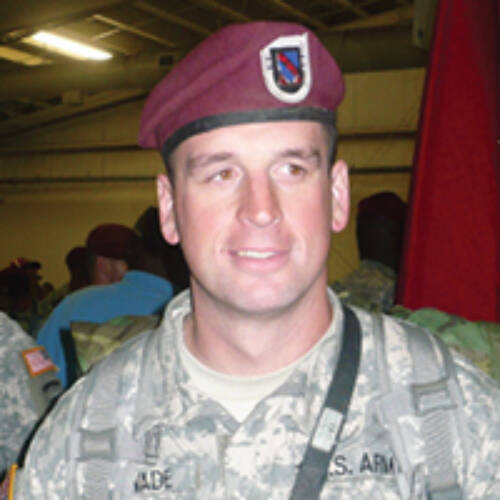 A Mizzou Law student is among the 60 student veterans selected to the 2017 class of Pat Tillman Scholars. Third-year law student Paul Wade is an Army veteran and a member of the Missouri National Guard.

Each year, the Pat Tillman Foundation receives thousands of applications from military veterans and their spouses. Only 60 of the best-poised leaders, who show strength in character, academic excellence and potential, are chosen as Tillman Scholars. Wade is one of two scholars from Missouri universities in the 2017 class.

Wade graduated from Glenwood High School in Chatham, Ill., and received his undergraduate degree from Truman State University in Kirksville, Mo. In the Army, he served in three combat deployments in Iraq and Afghanistan. Now a full-time law student at MU, Wade spends his free time volunteering with Team RWB, a community organization aimed at enriching the lives of America’s veterans. Previously, Wade served as vice-president of the law school’s Missouri Law Veterans Society. He also has participated in the law school’s Veterans Clinic, where law students can practice their legal skills helping veterans with legal issues connected to their service.

“As a veteran, I don’t believe myself to be any better than my civilian classmates, but I recognize that my experiences are drastically different from many other people attending law school,” Wade said. “The Pat Tillman Foundation recognizes the need to have veteran leadership at all levels to bring the unique experiences and perspectives veterans share into the public discourse. Being in the small group of Tillman Scholars allows me to be part of a group of veterans working to make the country and world a better place.”

Founded in 2004, the Pat Tillman Foundation invests in military veterans and their spouses through academic scholarships. The scholarship is named for Pat Tillman, the former NFL player who put his playing career on hold to serve his country after 9/11 and was killed by friendly fire. Since the foundation formed, more than 520 Tillman Scholars have been named from more than 100 universities.