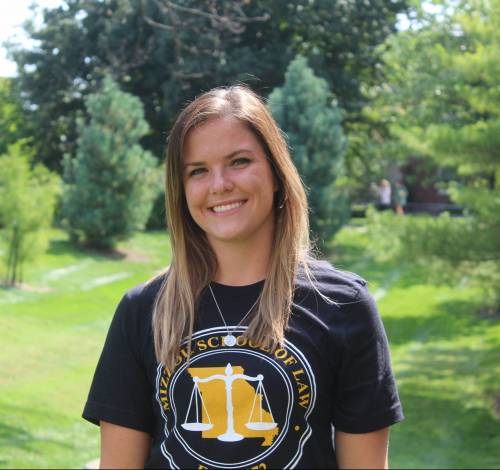 Hello there! My name is Katey Peters, and I am a 3L at Mizzou Law. My hometown is Alma, MO, a town of 400 people halfway between Columbia and Kansas City. I am Mizzou Made through and through as I attended Mizzou to obtain my undergraduate degree in Human Development & Family Science with a minor in Psychology. I did not decide I wanted to attend law school until I took a random job opportunity at Langdon & Emison Law Firm during the summer before my sophomore year of college. I have always wanted to work in the healthcare sector, especially with our elderly population, which influenced my decision to go to law school.

Mizzou’s location and affordability played a big role in my decision to attend Mizzou Law. Even though I attended Mizzou for my undergraduate degree, I had never been inside the law school. I applied to several schools, visited Mizzou Law, and confirmed the central campus location and home-like amenities stood out as the place I wanted to spend another three years. Everyone at Mizzou Law wants to see you succeed and gives you the tools to do so along the way.

When I toured Mizzou Law, the ambassadors were honest, helpful, and open to all of my questions and concerns. The application process can be daunting, but I, along with many other resources at Mizzou Law, are here to help you along the way. Please reach out of you have any questions, and I look forward to sharing Hulston with you.