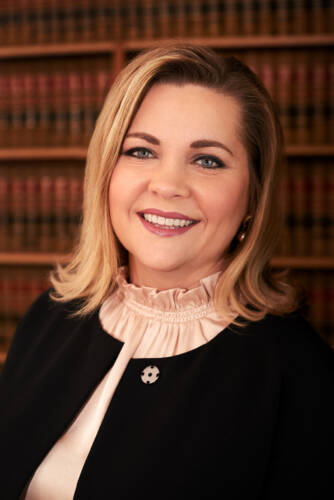 Kelly Christine Broniec, ’96, was presented with the Public Service Award by Missouri Lawyers Media at its 20th annual Women’s Justice Awards event on May 3, 2018.

The Public Service Award recognizes women who work on behalf of a nonprofit organization, government agency or the judiciary; or have made their mark in education.

Broniec was unable to attend the awards ceremony due to a previous commitment representing Missouri at the Midwest Pretrial Justice Summit sponsored by the National Center for State Courts, in Indianapolis, Ind. The Supreme Court of Missouri’s Chief Justice, Zel Fischer, invited Broniec to attend the summit as one of six team members from Missouri. She serves on the following committees at the appointment of the Missouri Supreme Court: Trial Judge Education Committee (2011-present), Coordinating Commission for Judicial Education (2017-present), chair of the Domestic Violence Subcommittee of the Combatting Human Trafficking and Domestic Violence Commission (2016-present), Task Force on Civil Justice Reform (2017-present), liaison to the Task Force on Criminal Justice (2017-present), Civic Education Committee (2015-present), and the Committee on Access to Family Courts (2010-2016). Broniec served on the board (2012-2018) and as president of the Missouri Association of Probate and Associate Circuit Judges (2016-2017). She also serves as chair of the 12th Circuit Fostering Court Improvement Committee (2013-present), and is a member of the Missouri Juvenile Justice Association. Broniec is a graduate of the Missouri Court Management Institute, earning the title of a Certified Court Manager through the National Center for State Courts.