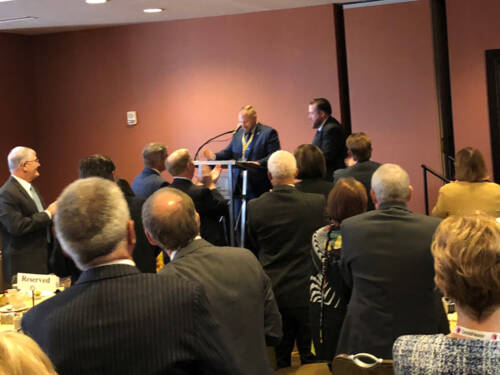 Karl A.W. DeMarce, ’97, was presented with the inaugural Exceptional Service to Justice Award by the Missouri Association of Probate and Associate Circuit Judges.

DeMarce was recognized by Zel M. Fischer, chief justice of the Supreme Court of Missouri, during the chief justice’s address at the joint annual meeting of The Missouri Bar and the Judicial Conference of Missouri in St. Louis. Fischer cited DeMarce’s commitment to the legal profession and the judiciary.

“He is a thoughtful participant on the criminal justice task force … on the heels of yeoman’s work shepherding the implementation of many municipal division improvements resulting from his contributions to the municipal division task force,” Fischer said. “His service has been expansive – from court automation to state judicial records, from garnishments to gender and justice, from civic education to trial judge education. A former legislator, his wisdom also has proved invaluable on our judicial conference’s legislative committee.”

Fischer also noted that “No matter what Karl is called upon to do, he always performs with utmost professionalism, humility and grace under pressure.”