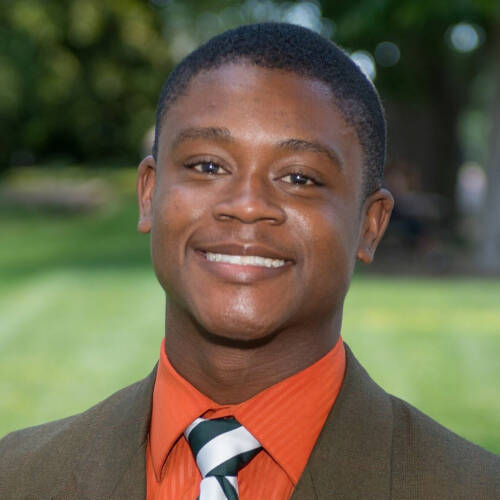 Anthony Ealy, 2L, will spend a 10-week summer fellowship working at the International Union of Painters & Allied Trades (IUPAT) in Hanover, Md. Ealy was chosen as a Peggy Browning Fellow, who are distinguished students who have not only excelled in law school but who have also demonstrated their commitment to workers’ rights through their previous educational, work, volunteer and personal experiences.

Ealy was exposed to the employment world by his father who is the current president of the National Association of Letter Carriers at the Grandview (Mo.) Branch. This exposure generated a compassion for protecting employees in the workforce. While interning for the Minority Floor Leader in the Missouri State Capitol he was involved in the process of fighting against Right-to-Work. Next, he went on to work on Capitol Hill as a Congressional Black Caucus Foundation Emerging Leader for Congressman Emanuel Cleaver. This position allowed him to travel to Turkey as a congressional liaison where he had the opportunity to visit a Syrian Refugee Camp. In law school, Ealy has worked for the Family Managed Care Division at Legal Western Aid and has studied comparative law in South Africa and Australia. Currently, he is in the Entrepreneurship Legal Clinic and is an associate member of the Journal of Dispute Resolution.

The Peggy Browning Fund is a not for-profit organization established in memory of Margaret A. Browning, a prominent union-side attorney who was a member of the National Labor Relations Board (NLRB) from 1994 until 1997. Peggy Browning Fellowships provide law students with unique, diverse and challenging work experiences fighting for social and economic justice. These experiences encourage and inspire students to pursue careers in public interest labor law. Ealy was one of 80 students chosen from nearly 450 applicants.