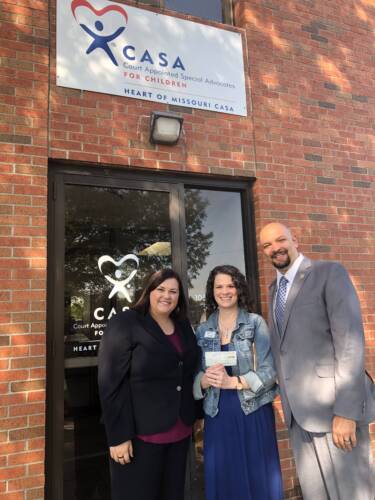 Each fall the MU Law Board of Advocates hosts a Fall Social and Trivia Night. The purpose is to get the students of the law school to interact with each other and the faculty in a fun, off the clock setting.

For 1L’s, it can be their first time getting to know their professors and 2L or 3L peers outside the academic setting of Hulston Hall. The BOA also hosts a raffle, giving away prizes that range from gift cards to discounts off bar prep programs. The money raised from the raffle goes to a local charity or cause.

This year’s event was held at the Heidelberg and organized by Sydnee Creel of the BOA. The board decided earlier that it would donate the money raised by the raffle sales to CASA (Court Appointed Special Advocates), a national organization that trains and supports volunteers to act on behalf of children in the foster care system.

Many family courts consider CASA to be their eyes and ears in these kinds of cases. Thanks to the work that CASA does, children who are in an overburdened and confusing foster system have someone who they can talk to and who represents their voice in the justice system.

The BOA felt that this was the kind of cause it would love to support so on September 27, Chairman Don Quinn and Sydney Creel visited with Kelly Hill, the Executive Director of Heart of Missouri CASA, in Columbia and presented her with a check for $750 from the BOA.

The generosity of the Mizzou Law students and Faculty, and the determination of the BOA to support advocacy in all its forms resulted in this generous donation. The BOA is looking forward to inviting Hill to speak with the students at Mizzou Law bout advocacy opportunities and the mission of CASA in the future.