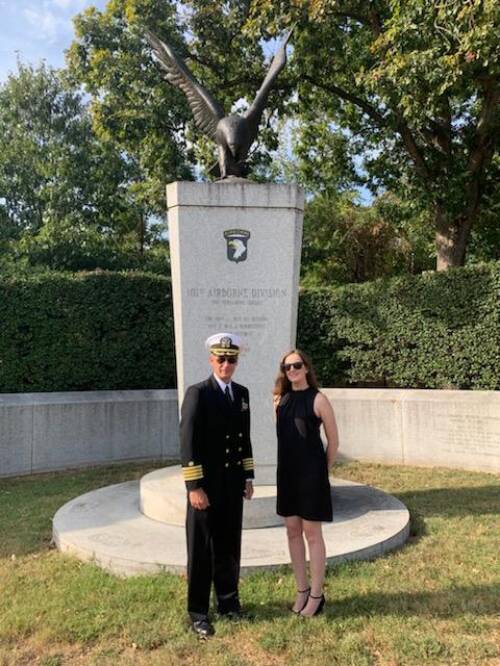 Veterans Clinic Director Brent Filbert, his wife Maggie Filbert, and Support Specialist Sara O’Connor joined the Combs family in Virginia as their patriarch Major General Roger E. Combs was interred at Arlington National Cemetery.  Major General Combs was a 1975 graduate of Mizzou Law and his family has provided generous support for the Veterans Clinic. O’Connor said she appreciated being able to, in turn, provide support to the Combses as they said their final goodbyes to Roger.

“Being included with the Combs’s closest family and friends is a wonderful demonstration of how the relationships we build with our donors go far beyond funding,” Clinical Director Brent Filbert said. “Above all, the Combses are friends and family of the clinic. We look forward to many more years of supporting them as they so generously support our work at the Veterans Clinic.”

Support Specialist Sara O’Connor noted that the event was touching on both a professional and personal level, saying, “My admiration for our nation’s veterans informs my life in so many ways. Visiting Arlington not only allowed me to support the Combses during the interment service, but it also gave me the chance to visit with a member of my own family. My great-grandfather, who served in both World Wars, is laid to rest in the same hallowed ground Major General Combs recently joined.”

As Filbert and O’Connor left Arlington at the close of the service, they made one final stop in memory of another key figure in the MU Veterans Clinic. Major Green was the father of Clinic Founder and Director Angela Drake, and he made the ultimate sacrifice during the Vietnam War. Professor Drake was unable to make the trip to DC so, in her honor, Filbert and O’Connor made a special stop at the monument to the Screaming Eagles of the 101st Airborne Division.