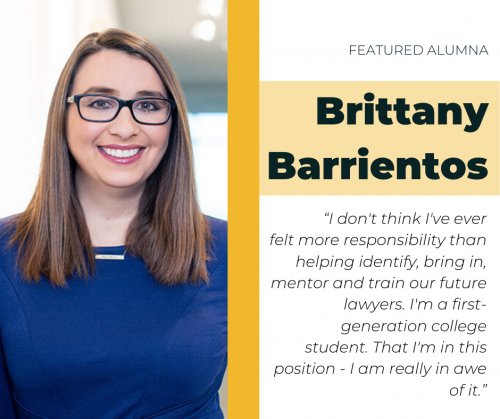 Brittany Barrientos, ’09, is now a partner with Stinson LLP in Kansas City, Missouri where she practices environmental law and focuses on environmental and safety compliance work. She is originally from Bastrop, Texas and remained in her home state to get a bachelor’s degree in journalism from Texas Tech University. However, when Barrientos first arrived in Columbia to tour the law school, she fell in love with the Midwest.

“I had never been to Missouri before,” Barrientos said. “I flew into KC, drove to Columbia and thought the Midwest was so beautiful. The deans were amazing and made me feel like more than an applicant or a number. They also introduced me to my first Mizzou friend, who not only showed me around campus, but ended up scouting out my apartment for me so I didn’t rent it sight unseen. I visited a lot of schools. Mizzou was definitely the best fit for me.”

As a student, Barrientos threw herself into law school life, becoming active in the Board of Advocates, working on a journal and becoming a teaching assistant. By taking on these many activities, Barrientos says she learned how to manage time and to be organized and efficient. She also co-founded the Hispanic Law Students Association at MU Law with a fellow Texan.

“Through that experience, we not only learned how to set up an entity, but a ton about the challenges facing diverse students in higher education,” Barrientos said. “While we’d both lived that experience, I don’t think either of us realized how prevalent the issues are. Diversity in the legal field has become a passion project for me.”

Like many of our recent graduates, Barrientos finished at Mizzou Law during uncertain times. Entering the workforce during the heart of the 2009 recession came with its own challenges.

“It was terrifying,” Barrientos said. “I knew I wanted to stay in Missouri, so I cast a wide net and applied throughout the state. I ended up getting a job at a firm in Jefferson City in the very good company of a number of Mizzou Law alums. I loved living in Columbia and I was really excited to start my career in mid-Missouri.”

Barrientos considers her biggest professional accomplishment thus far is her position as co-chair on Stinson’s Recruiting Committee. She is also very involved in the Kansas City community and says she is proud to incorporate service into her daughters’ lives.

“I don’t think I’ve ever felt more responsibility than helping identify, bring in, mentor and train our future lawyers,” Barrientos said. “I’m a first-generation college student. That I’m in this position – I am really in awe of it and feel an incredible responsibility to play an important role in identifying great people who are also great lawyers for Stinson.”

For current students/recent grads, Barrientos advises making yourself indispensable to whatever team you’re on. She says this will help you earn credibility with both your employers and clients. As an undergrad, Barrientos received this advice from a professor and has used it throughout her career.

“That is the best career advice I’ve ever received, especially starting practice in the recession,” Barrientos said. “I knew how to work hard. I also knew that I had no idea what I was doing and needed to buckle up and get to work trying to figure it out. From there, I always tried to find gaps that I could fill to add value to the team. I’ve also been lucky to be surrounded by working moms. As I had my own kids, I realized how valuable this is. I can’t even begin to quantify how valuable their advice and mentorship has been to me. The biggest takeaway for me is that there’s no one-size-fits-all way to do it.”