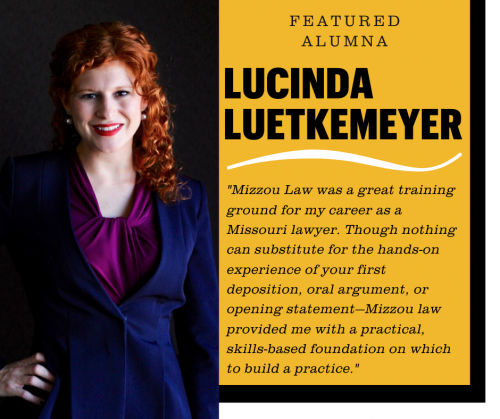 Lucinda Luetkemeyer entered the University of Missouri with a passion for storytelling and public policy, set on a career as a news reporter. She graduated in 2008 with a degree in news-editorial journalism and political science, and during undergrad, she wrote for the Columbia Missourian and interned at the state capitol.

“Though I loved writing and storytelling, I felt a pull to advocacy and was bitten by the political bug at a young age and knew I wanted to practice law,” Luetkemeyer said. “I enrolled in law school at Mizzou because I had no doubt that I wanted to be a Missouri lawyer. Today, I’m fortunate to use my Mizzou law degree along with my journalistic investigative skills in my practice serving clients, and to have a career that blends my love of law and politics.”

As a student at the law School, Luetkemeyer said she made some of her closest friends and made long-lasting connections with both students and professors.

“During my time in law school, I was fortunate to learn both how to think like a lawyer and the practical skills needed to actually survive as one,” Luetkemeyer said. “I benefited from professors like Dean Bob Bailey, Professor Thom Lambert, Carl Esbeck, and others who invested in my success and pushed me.”

Upon graduating, Luetkemeyer landed her dream job as a law clerk to Judge Duane Benton on the Eighth Circuit Court of Appeals in Kansas City, which she still attests was the best job she ever had. While in school, she prepared for this opportunity by focusing on her grades and writing and editing for the Missouri Law Review.

“Mizzou Law was a great training ground for my career as a Missouri lawyer, Luetkemeyer said. “Though nothing can substitute for the hands-on experience of your first deposition, oral argument, or opening statement—Mizzou Law provided me with a practical, skills-based foundation on which to build a practice. It also provided me with a built-in network, from classmates-turned-colleagues to MU grads serving as state and federal judges.”

In 2016, Luetkemeyer left Graves Garrett to serve as legal counsel to the Missouri governor’s transition team and soon after joined the administration as general counsel in the governor’s office.

“At age 30, I was one of the youngest counsels to a governor in the country, serving as the chief legal officer for Missouri’s executive branch, providing legal counsel to the governor, executive staff and cabinet officials,” Luetkemeyer said. “I oversaw and served as liaison to the general counsels of the more than 20 state agencies, boards and commissions in the executive branch. As counsel to the governor, I managed the governor’s judicial appointments process, overseeing the appointment of nearly 40 judges to Missouri trial and appellate courts. I led a team of lawyers who advised the governor and cabinet officials on an array of legal issues, including the constitutionality of legislation, executive orders, vetoes, appointments, federal initiatives, and disaster declarations.”

Since returning to Graves Garrett in 2019, Luetkemeyer has been named an “Up & Coming” lawyer by Missouri Lawyers Weekly, one of Kansas’ City’s “40 under Forty” business leaders by Ingram’s Magazine, a “Rising Star” by Missouri & Kansas Super Lawyers and most recently in Kansas City Business Journal’s “40 under 40.” Outside of her work, Luetkemeyer says, “my husband Tony (MU Law, Class of 2009) and I love to travel, are active in our community, and try to visit Columbia as often as possible to cheer on our Mizzou Tigers.”

To recent graduates, Luetkemeyer advises to “find a sponsor, not a mentor. They’re different. A sponsor will show you how to get business and will pass opportunities on to you, investing in your success in real ways. Practice law with people you respect—you’ll spend more time with them than almost anyone. Working with colleagues who have your back makes the hardest days infinitely better. Finally, surround yourself with people more talented than you are; great teams lead to great outcomes for clients and lawyers alike.”