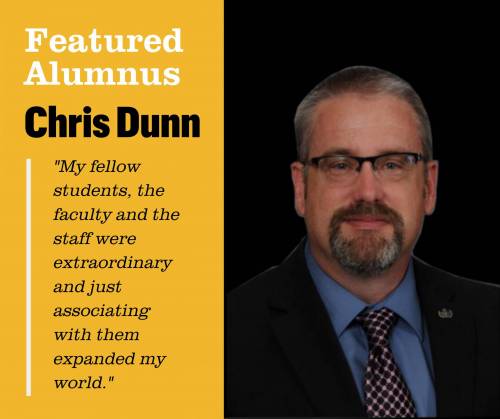 Chris Dunn, ’14, is the founder of GeoVelo, a multi-faceted business that creates geospatial forensic demonstratives among other geospatial business and legal intelligence services. He grew up around U.S. military bases while his father served in the U.S. Army, eventually moving to the Midwest to attend Kansas State University. After graduating with a BS and MS in geography and working 20 years as a department head in several local governments, Dunn at age 46, was looking for a new challenge and began applying to law schools.

“I applied to about eight law schools because I didn’t know if they let people my age into law school,” Dunn said. “Then one day the then Mizzou Law Director of Admissions Michelle Heck called me and told me I had been accepted at Mizzou. Even better, she had a partial scholarship for me.”

After meeting Greg Scott, Wilson Freyermuth, and Bob Bailey at an admitted student reception, Dunn knew Mizzou was the right place for him. As a student, Dunn loved all the people he met through Mizzou Law. He says both his fellow students and professors helped expand his world view and provide him with crucial experience for future endeavors.

“I loved seeing how Chuck Henson could size up, control, and direct a room full of sleep-deprived and jaded law students,” Dunn said. “I loved Angela Drake’s passion and mission to change deserving veterans’ lives for the better. I loved how Wilson Freyermuth didn’t just grade your papers, he gave them so much attention that you wanted to make him proud of the effort you put into his classes. I loved how Josh Hawley could argue both sides of tort issue and convince you that somehow both sides were right. I truly loved being around all those passionate and brilliant people.”

Yet, early in law school, he began to realize that he did not want to practice law after graduation. During school, a local attorney asked him to prepare a 3-D model of a murder for an innocence habeas appeal and Dunn quickly found his new passion.

“That’s when I knew that I wanted to use my geospatial skills to work with attorneys on complex cases involving geospatial issues.”

Dunn had already started GeoVelo during the summer before his 2L year and after graduating in 2014, he immediately got to work. GeoVelo starts its process by collecting and investigating facts. Then they build a digital 3-D model that allows everyday people to see the issue in a geospatial context.

“I quickly spotted my talent and hired myself,” Dunn quipped. “I also discovered there is a growing need for the services I provide.” 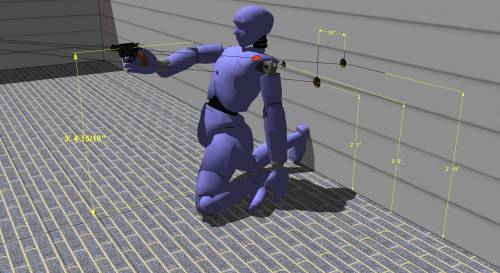 Dunn shares that one of his biggest professional accomplishments developed over a five-year wrongful death lawsuit. He produced a few hundred demonstrative exhibits. He says his ability to relate to the jury while under examination was what helped make him so successful. But he said the best part was after the verdict was read and the jury dismissed, a member of the opposing counsel team asked for his card.

“The beautiful thing about my work is that I am in the truth business,” Dunn said. “I model the facts of the case and I shoot it straight. Then I explain it to a jury if it benefits the case. Either my work benefits an attorney’s client, or it doesn’t. Being free to do good, unbiased work for others is incredibly rewarding.”

For current students/recent grads, Dunn advises being wary of your reputation within the law school. He says while he felt like he was in the middle of his class, being a dependable person who worked well with others helped him during his time at Mizzou.

“I’d suggest that you live a real life while you are chasing your legal career goals,” Dunn said. “Life is short, don’t sacrifice the good stuff to climbing a career ladder. The god of external validation is a false god.”