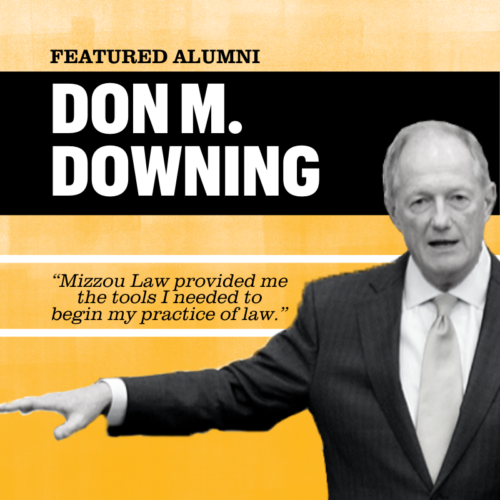 After graduating from the University of Missouri in 1979 with a bachelor’s degree in Economics, Don M. Downing decided to continue his education, entering Mizzou’s School of Law. He knew that he would want to practice in Missouri and decided Mizzou would be the best place to make long-lasting connections.

While at Mizzou Law, Downing was on the Missouri Law Review and worked for Senator Thomas F. Eagleton. He says these experiences played a major role in landing his first job as a clerk for United States District Court Judge Edward L. Filippine.

“Mizzou Law provided me the tools I needed to begin my practice of law,” Downing said. “I learned how to ‘think like a lawyer’, to conduct thorough legal research and how to write more concisely and persuasively.

Downing served as the Missouri Chief Deputy Attorney General, the state’s highest appointed legal officer, from 1993 to 1995. He now is a managing partner with Gray, Ritter & Graham P.C., where he represents plaintiffs in class action, mass tort, and complex commercial litigation.

Throughout his career, Downing has received a plethora of awards including but not limited to:

Throughout his life, Downing says his father has served as an invaluable mentor. “Among other words of wisdom, he counseled me to always keep a positive attitude, remember that bad times ‘would pass’ and to always persevere,” Downing said. “In the practice of law, there inevitably will be good times and bad times, and it is important to keep focus and never give up simply because the challenges faced are difficult.”

Downing has one son who is also Mizzou Law graduates as well as a daughter who is currently a 2L. He tells them to “(1) work hard; (2) try to avoid stress by remembering that difficult times ‘will pass’; and (3) develop and maintain relationships with your classmates.”