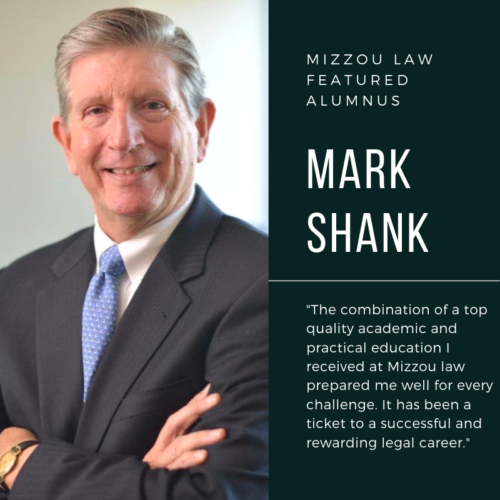 Mark Shank graduated from Mizzou Law School in 1979 and immediately started practice in Osage Beach, Mo., a very small town, and where he grew up. From a small town practice to big cities of Texas, Shank has become well-known and respected by the broad legal community

While at Mizzou, Shank met and eventually married his wife. They have been married for more than 38 years. Shank’s wife, Lu Ann is originally from Texas and wanted to return. He decided to give it a try.

“One hesitancy in moving was the fact that I had no contacts in Texas and did not know how my Mizzou education would translate,” he said.  “I can now say it translated very well, and prepared me well for a successful law career in Texas.”

After arriving in Texas, Shank said he knew he wanted to practice labor and employment law and litigation.

“I caught a break and obtained a job with the best L & E boutique firm in Dallas, Clark West Keller,” he said. “There, as I learned my craft, I quickly learned about the value of the highly practical education I received a Mizzou Law. And, that Midwestern values of hard work, reliability, and dedication paid off. I was able to try multiple cases all over the state and make partner in five years.”

Shank stayed at Clark West Keller until 2001. During his career there, he achieved several career milestones:

In 2001, Hughes and Luce recruited Shank, then one of the top regional firms in Texas. While with Hughes and Luce, Shank continued to receive accolades, such as:

In 2008 Hughes and Luce merged with K & L Gates, then a 2,000 lawyer firm. Shank said the size of the firm wasn’t a good fit for him and joined what became Gruber Hail Johansen Shank and eventually became its managing partner.

He attributes his more than 40 years of career success to his Mizzou Law education.

“I have worked along-side and against lawyers from the most prestigious schools in the country, and from every Texas school, he said. ” The combination of top-quality academic and practical education I received at Mizzou law prepared me well for every challenge. It has been a ticket to a successful and rewarding legal career. Never once did anyone question my Missouri degree or indicate that it was not up to snuff.  Instead, it appeared others believed I was well trained and well prepared for practice.”

Shank said he firmly believes other Mizzou graduates can have a similar success story.

“Any Mizzou graduate can be highly successful when their good training is combined with hard work and thoughtful career choices,” he said.

Would you like to be a featured alumnus or alumna? Email Aurora today!