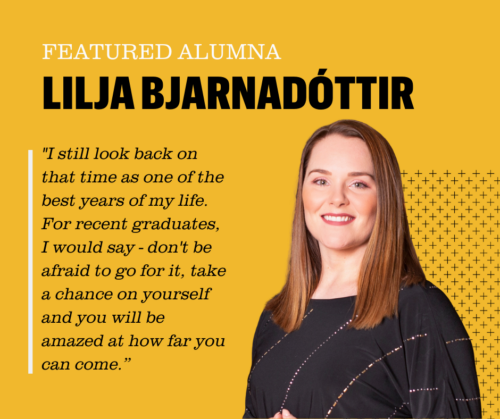 A couple of years after graduating with a BA and an MA in Law with an emphasis in antitrust law from Reykjavik University, Lilja Bjarnadóttir came to Mizzou Law as a member of the LLM Class of 2015.

“I chose the LLM program specifically because I wanted to study negotiation and ended up falling for mediation as well,” Bjarnadóttir said. In addition to finding her passion for mediation, she says the academic environment was her favorite aspect of her Mizzou Law experience.

While in the LLM program, Bjarnadóttir took on a research project that analyzed the status of mediation in Iceland.

“I found that there was a hole in the market and the business plan accidentally came to light there,” Bjarnadóttir said. “My plan when I came home was to someday in the future have a career working in conflict resolution, but because there was no other place I could apply to gain more experience, I decided to start my own practice, while everything I had learned was still fresh.”

Immediately upon graduating, Bjarnadóttir founded her own company, The Road to Resolution, the first Icelandic mediation firm to specialize in business mediation. In her practice, she focuses on mediation and conflict resolution, primarily in cases of workplace disputes but also in divorce mediation. Additionally, Bjarnadóttir now teaches dispute resolution to law students at Reykjavik University and mediation at Bifrost University. Since 2016, she has served as the chair for the Icelandic Mediation Association which holds conferences with international speakers and runs a special program called “The Mediator’s School.”

“I would say that because mediation has not developed as much in Iceland as in other fields, I had plenty of opportunities to go far within mediation here,” Bjarnadóttir said. “However, that also means that I have been one of the first to ‘plow the field’ so to speak. I have in a short time become the leading expert in mediation in Iceland.”

Throughout her career journey, Bjarnadóttir says she has had many mentors. “I look up to my professors at MU, but my main mentor has been my mother,” she said. “She is the one who told me to go for it and start my own business, even though it was a very big first step after just graduating.”

When she is not busy running her business, teaching or working with the Icelandic Mediation Association, Bjarnadóttir says she loves to be outdoors in Icelandic nature, reading a good book or watching a film with her husband.

For those who are considering MU Law, are current students or recent graduates, Bjarnadóttir says, “Use your time well to make the most of the precious time at MU! I sometimes wish I could have stayed longer than the one winter I had at MU, and I still look back on that time as one of the best years of my life. For recent graduates, I would say – don’t be afraid to go for it, take a chance on yourself and you will be amazed at how far you can come.”