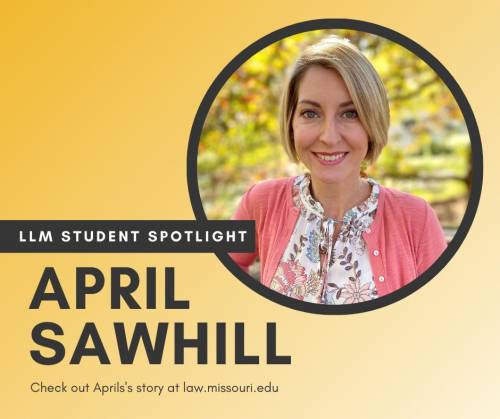 Fifteen years after graduating with a JD from the University of Tennessee College of Law and living abroad in South Korea and Singapore, April Sawhill returned to school as an LLM student at Mizzou Law.

“While living in Southeast Asia, I observed a global trend toward greater participation in alternative dispute resolution (ADR) and realized it would impact my return to active practice,” Sawhill said. “I also heard the call for more diversity among ADR practitioners. I believed an LLM would enhance my prior training and experience and provide me with the skills I needed to be a competent dispute resolution specialist.”

Sawhill spent her time after law school practicing in the areas of commercial litigation, insurance coverage, and catastrophic personal injury; she also served as the executive director at the Down Syndrome Association of West Michigan until 2017. After deciding to pursue her LLM, Sawhill said she selected Mizzou because she wanted to train and learn from dispute resolution experts.

“My professors are leaders in their field and their connections are immense,” Sawhill said. “I learned this firsthand when I attended a global arbitration conference in Seoul, South Korea last year and had several international speakers ask me if I knew Professor Lee and Professor Strong at the law school and relay messages back to them.” 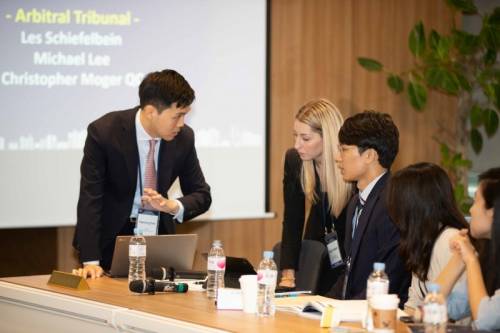 April Sawhill represented the LLM program at the Seoul Academy for International Arbitration 2019.

Sawhill is in the process of completing her LLM through Mizzou Law’s fully online degree program. While she said she was worried at first, Sawhill cited the flexibility to design the coursework to fit around her schedule and her family’s needs as a benefit to the online program.

“I was concerned that a program fully online would dampen discourse among students,” Sawhill said. “Not so; because students have time to prepare their thoughts, consider other comments, and engage on their terms, the conversations have been richer. My classmates are from all over the world and in different stages of their careers, offering unique and valuable perspectives on managing conflict.”

When looking to the future, Sawhill said she originally intended to return to practicing law as a litigator and arbitrator. However, throughout the program, she found herself enjoying the problem-solving aspects of mediation and online dispute resolution and she can see herself pursuing that after she completes the program.

“Through the externship program and my supervisor Professor Amy Schmitz, I’ve been able to work with the International Council for Online Dispute Resolution (ICODR) on emerging ethical considerations for ODR, including presenting at the National Center for Technology and Dispute Resolution’s (NCTDR) Cyberweek 2020,” Sawhill said. “This scholarship is incredibly timely, given the explosion of ODR as a result of COVID-19. So, I have several options and I am excited to see in which direction these opportunities lead me.”

Back in August 2020, Sawhill and her family moved from Grand Rapids, Mich. to Chattanooga, Tenn. after leaving their previous home of Busan, South Korea in February due to COVID-19. She credits the online degree program as the reason she is able to manage everything in her life without falling behind in the program.

For those considering the online LLM program at Mizzou Law, Sawhill says, “First and foremost, I would advise someone to appreciate that this is a graduate program with high-caliber coursework and scholarship and that it can be demanding. Although we communicate through technology, it has made our interactions more intimate at times. I’ve had the opportunity to engage with my classmates (and professors) in their homes, with their children or pets, or while they’re traveling or working. It always makes for fun and interesting conversations and ones that do not typically occur in a traditional classroom setting.”