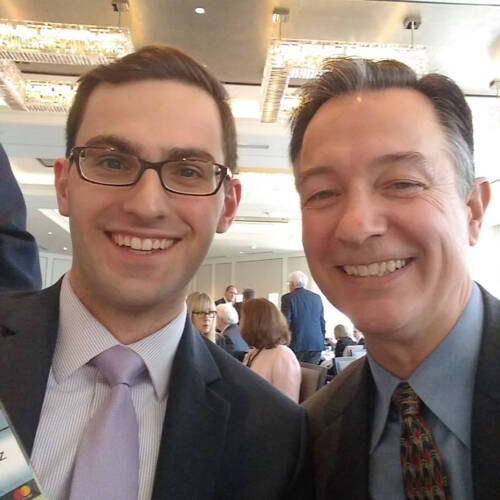 MU 3L George Khoukaz recently received the Joseph T. McLaughlin Original Student Article Award from the International Institute for Conflict Prevention and Resolution (CPR) at a gala dinner at the Whitley Hotel in Atlanta, Ga.  The winning essay, “ADR That is Out of This World: A Regime for the Resolution of Outer- Space Disputes,” addresses various issues regarding space arbitration and was published in 2018 Journal of Dispute Resolution 265.  Khoukaz is the second MU student to win the McLaughlin Award in recent years, following in the footsteps of Theresa Mullineaux, who won in 2017 for her note, “The Latest NFL Fumble: Using its Commissioner as the Sole Arbitrator: State ex rel. Hewitt v. Kerr,” 2016 Journal of Dispute Resolution 229.  Khoukaz succeeded Mullineaux as editor in chief of the Journal of Dispute Resolution. He also is the Mediation Competition Director of the Board of Advocates.

As pictured, Khoukaz and Professor Hinshaw had the good fortune to be sitting together at the award dinner. CPR is an independent nonprofit organization that has helped global businesses prevent and resolve commercial disputes effectively and efficiently for more than 40 years. This was the 35th year that CPR presented its academic awards for outstanding scholarship in dispute resolution.