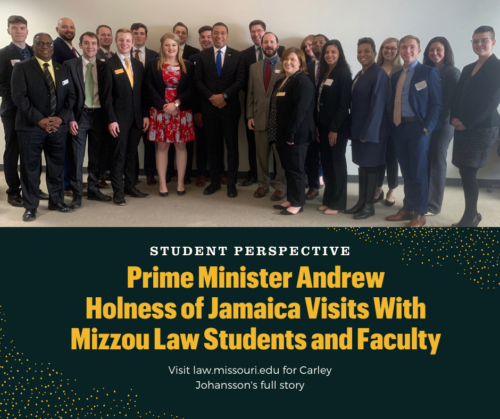 On Thursday, February 6, Prime Minister Andrew Holness of Jamaica and Her Excellency Audrey Marks, the Jamaican Ambassador to Washington visited with students in Hulston Hall. 2L Carley Johansson shared her thoughts with us:

What makes a place like Mizzou Law so special is the opportunity to be in incredible places with incredible people. On February 6, a small group of law students and faculty were presented with such an opportunity when Prime Minister Andrew Holness of Jamaica and Her Excellency Audrey Marks, the Jamaican Ambassador to Washington, came to Hulston Hall for lunch.

Mizzou had been buzzing for weeks at the visit of the Prime Minister, as he was coming to speak on the state of Constitutional Democracy in Jamaica and the Caribbean. An email went out in the weeks leading up to his visit, inviting law students to submit their name to be on the list of folks who would be able to dine and speak with the Prime Minister in a more intimate setting. I leaped at the opportunity, thrilled at the prospect of engaging with someone who had such a unique perspective on what it means to develop democracy. My name was chosen, and the excitement only grew.

Of course, I was also nervous. I think many of us were. After all, it isn’t every day that one can dine with a Head of Government. The nerves immediately subsided, however, when the Prime Minister and Ambassador arrived. The Prime Minister shook each of our hands, and Her Excellency shared a warm smile with everyone in the room. Suddenly it felt less like an intimidating meeting, and more like lunch.

As we sat to eat, the Prime Minister introduced himself to each of us and touched on the ways that Jamaica is developing its democracy in comparison to the United States. Then he took questions from the students and faculty. He spoke candidly about immigration, climate change, and political participation. I even mustered up the courage to ask something that was on my mind. I was curious to know what justice and liberty mean to the Jamaican people, and what that looks like at their developmental stage. In response, The Prime Minister discussed how Jamaica’s history of oppression has (understandably) led to a strong sense of personal freedom and liberty. The challenge is finding a way to reconcile that with a structured and the rule of law. Perhaps the most compelling point he made was that there must be a way to have “the big guys” while ensuring they do not step on the little guys.

In his opening remarks, the Prime Minister said that though it was freezing outside, the welcome he had received at Mizzou was so warm that it began to melt the ice. I am going to have to respectfully disagree, as I believe it was the Prime Minister’s and Ambassador’s warm sincerity and enticing conversation that helped to melt the snow and ice that afternoon. Whatever the reason, there was truly no better way to spend a snowy Thursday than in great conversation with an even better company.

Many thanks to Prime Minister Andrew Holness and Her Excellency Audrey Marks for visiting with us, and to the Mizzou Law Faculty and Staff that made this luncheon possible.