For many past students, the trip to Kruger National Park was the highlight of their entire South African experience. Kruger Park is the largest game reserve in South Africa and one of the best places in the world to see the “Big Five” (rhinos, leopards, lions, elephants and cape buffalo). As part of the South African Study Abroad Program this summer, Professor Uphoff will lead an optional trip to Kruger from July 15 – July 19.

We will leave Cape Town on the  afternoon of July 15 and fly to Johannesburg ( OR Tambo airport). We will stay near the airport and leave early on Sunday, July 16 at 7:00 am and head to Kruger by vans.  The trip to the entrance of Kruger park will take about 4 ½ hours. The first afternoon and evening will be spent at Berg-en Dal, an enclosed camp located in one of the best game viewing areas of the park. 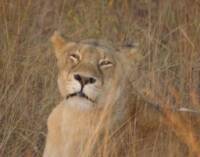 The following day we will do self-drive looking for wildlife and return to camp around 9 for breakfast. We will then drive to Lower Sabie camp and after checking in, we will go on a 3 hour sunset drive lead by a Park ranger leaving at 4:00. The next morning we will again  do our own self-drive returning around 9:30 or 10:00.  That afternoon we will again go on a park ranger led sunset drive. On the morning of  July 19, we will drive through the park and leave the park around noon  to drive back to Johannesburg for a flight back to Cape Town or to the US.

The trip will cost $575 and includes one night in Johannesburg and 3 nights in bungalows or safari tents  in Kruger Park at Berg-en Dal and Lower Sabie, transportation to and from Johannesburg to the Park, daily self-drives in the park, 2 sunset game drives led by a Kruger Park Ranger, and all conservation fees in Kruger. Food and drinks are not included but there are kitchens/ grills on the porch of  the bungalows or safari tents and very reasonable restaurants available for those who do not want to cook. The flight to Johannesburg is not included and it generally costs between $85- $150 roundtrip.

Stellenbosch is a small university town located about 45 minutes from Cape Town. The Stellenbosch Valley forms part of the Cape Winelands, the largest wine-growing region in South Africa. The Stellenbosch wine route, established in 1971, is world-renowned and includes more than 400 wine cellars, most of which are open to the public. We will spend a day visiting three wineries and enjoying the picturesque scenery of Stellenbosch.

The Cape of Good Hope and Cape Point are the southwestern most points of Africa (Cape Agulhas, located 90 miles to the east is the southernmost point). The Cape of Good Hope is a rocky headland on the Atlantic Ocean side of South Africa and probably the most famous of the South African capes. When the Portuguese rounded this Cape in 1488, it was the first major milestone in the many attempts to establish a sea route to the Far East. When we visit Cape Point, you will see absolutely breathtaking scenery, as the entire southernmost portion of the Cape Peninsula is an unspoiled national park with at least 450 species of natural birds and 1100 species of indigenous plants. If we are lucky, we will see ostrich, bok (antelope) and baboons at Cape Point. We also will stop at Boulders Beach in Simon Town, a nature reserve that houses a colony of African penguins.

The de facto capital of South Africa is Pretoria, where the executive branch is located. The judicial branch of the government is located in Bloemfontein and the legislative branch (Parliament) is in Cape Town. We will spend an afternoon watching the proceedings at the Parliament. In past years, students have even been able to see the President or Deputy President answer questions before Parliament. 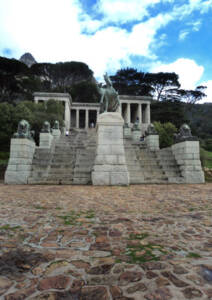 This museum honors the rich and tragic history of the District Six area of Cape Town. District Six was a vibrant area in Cape Town established in 1867 as a mixed community of freed slaves, merchants, artisans, laborers and immigrants. In 1966, the government declared District 6 a white area under the Group Areas Act of 1950 and forced over 60,000 people to relocate to nearby townships. The area was mostly flattened by bulldozers and remains only sparsely developed.

Located seven miles off the coast of Cape Town, this island has served as a leper colony and later as a prison for political prisoners. Nelson Mandela spent 19 of his 26 years in prison at Robben Island. Many of the tour guides are former prisoners.

Khayelitsha is the third largest township or “informal settlement,” in South Africa (behind Soweto and Sharpeville, both near Johannesburg). Created in the early 1980’s, it now houses between 500,000 and 1 million people and is located on the outskirts of Cape Town in the Cape Flats.

Goodwood Prison is a relatively new prison, opening in 1997. South Africa’s criminal justice system is different from the United States’ in that prisoners waiting to be sentenced and those who have already received prison sentences are housed together.