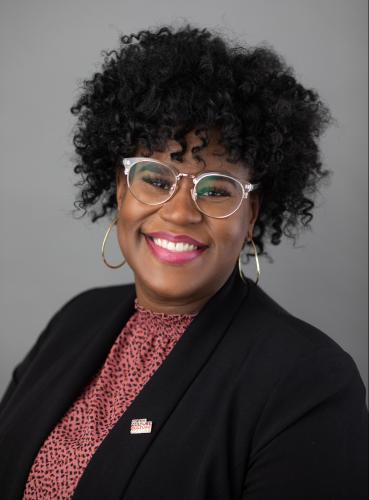 With local and midterm elections coming up soon, the unopposed candidate for associate circuit judge in Boone County is already clear.

When elected this November, Judge-Elect Kayla Jackson-Williams, an alumna of Mizzou Law, ‘16, will be the first Black Boone County judge in its more than 200-year history.

“I didn’t realize how monumental that would be,” said Jackson-Williams. “I was at Roots & Blues with my daughter, and this little girl, maybe 8 years old, said, ‘Mommy, that’s that Black judge.’ and they walked over, and her mom said, ‘I’m sorry, we talk about you a lot, she wants to be a lawyer when she grows up.’ And that’s when it really hit me.”

Jackson-Williams knew from a young age that she wanted to be a lawyer, but she never imagined herself becoming a judge.

“In 6th grade, my teacher Mr. Cozart said to my mom, ‘If she doesn’t become a lawyer, something went wrong.’ I just have this real love for writing and arguing.”

After graduating from Truman State University with a bachelor’s in justice systems, Jackson-Williams was accepted into several law schools, including Saint Louis University, Drake, Vanderbilt, and Mizzou. After comparing the cost and degree value across her options, she chose Mizzou.

She credits her time as a law student for helping her realize the power of her words.

“I found my voice at Mizzou—I always had a strong voice, but I found the power of my voice. It was a stressful but empowering time.”

“She was inquisitive in class and an extremely hard worker. If you know her, you know that she has an infectious personality and quickly puts people at ease,” said Professor David Mitchell, who taught Jackson-Williams and served as a mentor at Mizzou Law. “She has been the consummate professional, but she is also passionate about justice and a compassionate individual. She will put in the time, effort and hard work to be the best judge that she can be.”

In the spring of her 3L year, Jackson-Williams hit an unexpected challenge. She became pregnant with her daughter and, due to the high-risk nature of the pregnancy, had to put off studying for the bar exam until her daughter was born in November.

After passing the bar exam the following February, Jackson-Williams was now a single mother. While she initially had plans to look for work in Kansas City, she decided to stay in Columbia because she was able to secure a job quickly.

After a few months, she found herself working for the Boone County Public Defender’s Office, where she loved working hands-on with clients. However, as her daughter got older, she began seeking better-paying positions in the private sector. She took an offer from Rogers | Ehrhardt Attorney at Law and began practicing civil litigation.

She also took an adjunct professorship at Mizzou, teaching client interviewing and counseling.

All her past experiences led her to run for associate circuit judge this fall.

As a judge, she hopes to bring her compassion and well-rounded background to the bench.

“One of the things I’m looking forward to is having honest conversations with the judges, just giving them different things to think about,” Jackson-Williams said. “Giving the judges other things to consider because they’re hearing it from a trusted colleague.”

Following the election, where she runs unopposed, Jackson-Williams will be sworn in this January.

She hopes to continue to be a friendly, recognizable face in the community and to bring empathy and personality to her time on the bench.