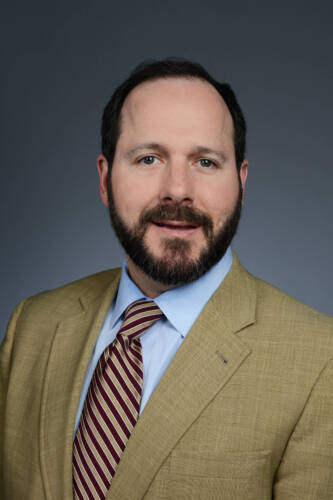 Professor Trachtenberg joined the law faculty in 2010. In 2012, he received the Gold Chalk Award for excellence in teaching from the University of Missouri Graduate Professional Council. In 2014, he won the Provost’s Outstanding Junior Faculty Teaching Award, and in 2015, he received the Husch Blackwell Distinguished Faculty Award from the School of Law. He has won awards for university leadership from the MU campus and the UM System.

Professor Trachtenberg previously represented the law school on the MU Faculty Council on University Policy, which he chaired during 2015-2016 and 2016-2017. Trachtenberg became the Director of Undergraduate Studies for the School of Law in 2019 and became Special Advisor to the MU Chancellor in 2020.

In her announcement, Dean Lidsky shared, “Ben’s prior experiences have acquainted him with some of the difficulties of scheduling academic personnel and negotiating university bureaucracy. Together with his service on Faculty Council, the network of relationships Ben has built across campus as well as the deep knowledge of university processes and procedures should benefit our law school tremendously.”