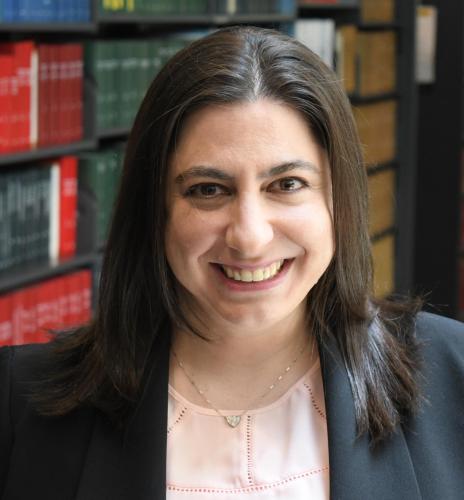 When Professor Rachel Wechsler and her husband Steven Evers moved to Columbia from the hustle and bustle of New York this summer, the first thing they did was begin to explore the many walking paths and biking trails.

Professor Wechsler accepted a professorship at the University of Missouri School of Law after experiencing Columbia’s small-town charm and the strong sense of community among Mizzou Law students and faculty.

“This is a really supportive community, a really vibrant community,” she said. “I wake up every day thinking about how lucky I am to be here.”

Her move to Missouri was an important step in her goal of improving the lives of survivors of gender-based violence.

As a teen, Professor Wechsler remembers wishing she could do more to advocate for the issues she cared about. After earning a bachelor’s degree in human development and a master’s degree in evidence-based social work, Wechsler recalls feeling frustrated that policymakers often ignored compelling evidence from social science research about which policies helped mitigate social problems and which actually caused more harm than good.

As a result, she decided to take her advocacy a step further and attend law school at the University of Pennsylvania.

After completing her law degree, Professor Wechsler began work as a litigation associate at Latham & Watkins LLP in New York. Outside her regular caseload, she worked on many pro bono cases involving issues of gender-based violence.

Through her work on these cases, Professor Wechsler recalls noticing a gap in the knowledge we had about survivors’ experiences. She decided to attend the University of Oxford in the United Kingdom for her doctorate in criminology and go into academia to help fill that gap.

“When you’re locked down with someone that abuses you, you don’t have those normal escape routes of leaving the house, going to work,” she said. “Also, financial stress and unemployment are significant drivers of intimate partner violence. And those are factors that intensified during the pandemic as well.”

Professor Wechsler’s background will also allow her to collaborate with other departments here at Mizzou. She has been given courtesy professorships at the School of Social Work and Department of Sociology, which will connect her with other leaders in those fields and involve her in interdisciplinary projects.

“My studies have allowed me to look for solutions that go beyond just one field,” she said. “I believe that’s really helped me in the research and the teaching that I do– to think about the law in a wider context.”

Professor Wechsler views each of her different areas of study as tools in a tool belt, helping her take a broad view of complex social problems.

This fall, she is excited to be teaching family law and serving as the faculty advisor for the Journal of Dispute Resolution. She will also teach criminal law and negotiation at Mizzou— a result of her interest in responses to gender-based violence, including restorative justice and other alternatives to the traditional criminal legal process.

“I’ve been really impressed with the students,” she said. “It’s been a pleasure talking to them about their career ambitions and what they’re hoping to accomplish here, and how I can support them as they work towards their goals.”

Professor Wechsler is looking forward to supporting student goals while advancing her own— one step at a time.