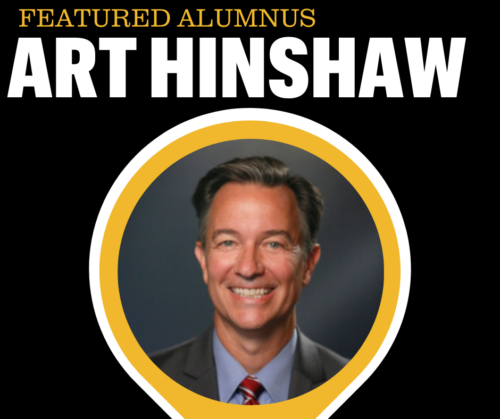 Although Art Hinshaw wasn’t born in Columbia, he has grown to see it as his home. In addition to spending grades 6 through 10 in town, Hinshaw received both his JD and LLM from Mizzou Law and in turn, worked at the law school while serving as an adjunct professor. His time at Mizzou led him into a career in legal academia during which he has served as an adjunct professor of law at Washington University School of Law, and a visiting professor of law at Hamline University School of Law. In 2004, Hinshaw joined the faculty of the Sandra Day O’Connor College of Law at Arizona State University where he acts as director of the Lodestar Dispute Resolution Program and a clinical professor of law.

After graduation from Washington University in St. Louis with a degree in history, Hinshaw chose Mizzou Law for fiscally effective education. “I was already in debt and needed to keep costs down,” Hinshaw said. However, he claims the best part of his student experience at MU was “meeting people who are still my closest friends.”

Hinshaw’s first job after graduation was “as an associate at a big firm Watson & Marshall in KC, which was founded by the golfer Tom Watson’s grandfather.” He got the job through an on-campus interview which had also resulted in a summer clerkship. Hinshaw attributes Mizzou Law with teaching him how to “always give it his best”, which prepared him both for this first step and for the rest of his career.

Over the years, Hinshaw says he’s had many mentors in the Mizzou Law faculty including Bob Bailey, Len Riskin, Jean Sternlight, Bobbi McAdoo, among many others.

“The person I want to mention here is former faculty member Gregory J. Scott,” Hinshaw said. “I met Greg when I was 12 and he was a lifeguard at the old Stephens Lake facility. We kept in touch for years, and he gave me great advice when I was investigating law school and throughout my career – especially once I started teaching. He was the best classroom instructor I have known, and his advice was simple – have fun while teaching. And I’ve taken that to heart.”

Throughout his career, Hinshaw’s accomplishments have included several published articles, co-authoring a law school textbook, and a manuscript that has recently been submitted to Oxford University Press.

For recent and future students at Mizzou Law, Hinshaw advises to “always give it your best — you can’t ask for anything more.”