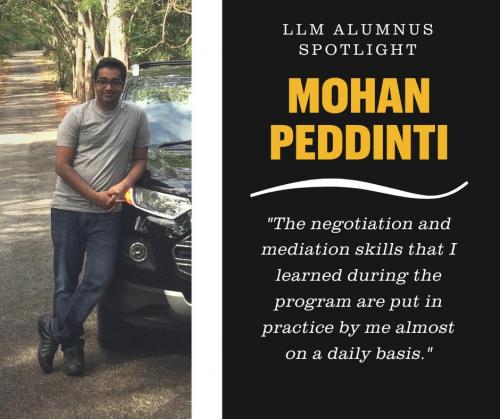 After receiving his Bachelor of Laws degree from NALSAR, University of Law in Hyderabad, India, and completing two years in a corporate legal role at Dr. Reddy’s, Mohan Srimat Tirumala Peddinti packed his bags and moved over 8,000 miles to Columbia, Mo., in August 2006 to pursue his LL.M. degree at the University of Missouri School of Law.

“Mizzou Law is renowned for its dispute resolution program and is one of the leading institutions in the ADR field,” Mohan said. “Hence, the choice was quite straightforward.”

Mohan cited his interest in alternative dispute resolution methodology, especially negotiation, as reasons for wanting to pursue his LL.M. He said he also wanted to experience university life in Columbia as he had heard great things from people who had participated in the program before him.

“It was indeed one of the most memorable years of my life,” Mohan said. “I very fondly recollect the experience at the Center for the Study of Dispute Resolution (CSDR), Mizzou Law and also life at the university.”

Mohan said he is grateful for the experience he had and for the students and faculty he met and created relationships with during the LL.M. program. He also shared how much of an impact completing the program has had on his life and legal career over the last 13 years.

“The negotiation and mediation skills that I learned during the program are put in practice by me almost on a daily basis,” Mohan said. “The key learnings from the LL.M. program were also quite relevant during my past job stints at Goldman Sachs, IBM and Genpact/GE.”

Mohan has since returned to his home in Hyderabad, India where he currently works as a director and senior legal counsel at Virtusa Corporation. During his free time, Mohan likes to go on long road trips, spend time in nature and he has recently been rekindling his love for real-time strategy video games. Mohan is also currently in the process of transforming into a minimalist and adopting a vegan lifestyle.

For future Mizzou LL.M. students, Mohan says the CSDR is the place to be if you are interested in dispute resolution. He also emphasized the value he derived from his time in Columbia and what the LL.M. program meant to him.

“I truly cherish the experiences at CSDR and can never forget the fond memories that I have from the LL.M. program,” Mohan said. “I am especially grateful to the faculty/staff and fellow students who made my life more meaningful by being a part of it during the amazing program at Mizzou Law.”