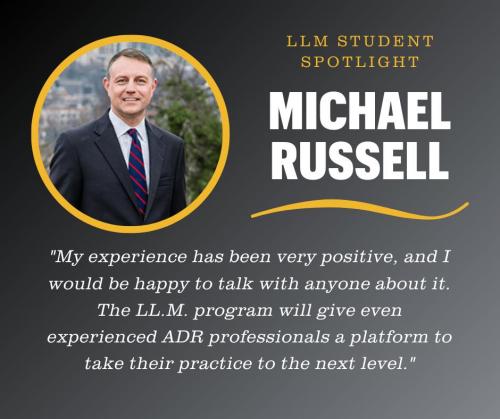 After graduation from the University of Memphis School of Law in 1999, Michael Russell went on to practice labor and employment law for almost 20 years. Now, with a busy mediation and arbitration practice, Russell is pursuing his Master of Laws degree through Mizzou’s online LLM program.

“I had been interested in an LLM for some time,” Russell said. “When Mizzou made the decision to offer their LLM through an online learning platform, that gave me the opportunity to do something I had wanted to do for a while.”

Russell said he never had the chance to look at alternative dispute resolution or ADR from an academic standpoint and going back to school to get his LLM would give him the chance to ask himself why he uses the techniques that he does.

“I’ve found that looking at negotiation theory has helped me become a better practitioner,” Russell said.

Russell currently resides in Nashville, Tenn., with his wife and two sons where he also teaches ADR at the Belmont University College of Law. Despite his busy schedule, Russell says the online LLM program at Mizzou has been accommodating to his schedule.

“It has been more manageable than I expected,” Russell said. “The asynchronous nature of the program has allowed me to tailor my studies around my mediation and arbitration practice.”

He also credits his experience with Mizzou’s online LLM program for changing his view of online education. Russell said he remembers thinking about how his online mediations with Professor Ladehoff’s Non-Binding Methods class were interesting but not something he would do in the real world.

“Little did I know what 2020 would bring,” Russell said. “I think the events of 2020 will cause us to rethink a host of issues, including online education and how we practice dispute resolution going forward.”

When looking to the future, Russell hopes to continue to develop his ADR practice into a national practice. He is also currently working on a book for advocates addressing best practices in mediation and negotiation. However, Russell also plans to celebrate after finishing the LLM program at Mizzou in the spring of 2022.

“My wife and I also love to travel,” Russell said. “We’ll celebrate our 25th wedding anniversary the summer after my Mizzou graduation. We’ll plan a special trip to celebrate both milestones.”

For future Mizzou Law LLM students, Russell says, “Call me. That’s my first piece of advice. My experience has been very positive, and I would be happy to talk with anyone about it,” Russell said. “The LLM program will give even experienced ADR professionals a platform to take their practice to the next level.”