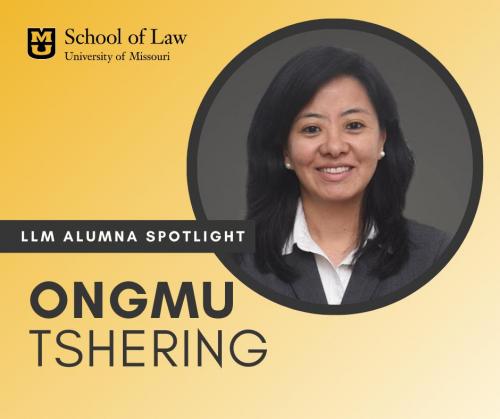 When assisting a senior counsel in an international arbitration proceeding in her first year following law school, Ongmu Tshering found she had a strong interest in arbitration dispute resolution. After deciding she wanted to explore LL.M. programs, specifically international ones, Ongmu left her home in India to pursue her LL.M. in Dispute Resolution at Mizzou.

“In 2006, the LL.M. program at Mizzou Law ranked no. 1 according to the U.S. News & World Report and thus, became an obvious choice,” Tshering said.

Tshering said life at Mizzou was both amazing and challenging. The challenges came from moving to a foreign country, education loans and returning to life as a student after working for three years. However, she adds that the financial aid she received from Mizzou helped her transition to be a student once again.

“The student life at Mizzou exposed me to experiences that I will cherish and be grateful for all my life,” Tshering said. “It taught me some life skills such as being self-reliant, independent and appreciating help. I met wonderful people from diverse backgrounds, cultures and age groups.”

Tshering cites the connections MU Law professors helped her make within the ADR field in the U.S. as the most valuable to her time in Columbia. She said the references from the professors helped her get work experience at the American Arbitration Association and CPR Institute for Dispute Resolution in New York and the Conflict Resolution System at the World Bank in Washington D.C.

After completing her LL.M. and working in the U.S., Tshering returned to India in December 2007 and got hired as an associate at J. Sagar Associates, where she is now a partner. Her current area of practice covers diverse areas of corporate law with a focus on cross-border transactions, corporate restructuring, joint ventures, and private equity investments among others.

Tshering now lives in Mumbai with her husband, Praveen, and her 10-year-old son, Joshua. She also loves to travel, something she missed in 2020 due to COVID-19.

“I also enjoy gardening and a bit of baking,” Tshering said. “Thanks to these hobbies, we were able to survive home isolation in our apartment for the last 10 months.”

For future Mizzou Law LL.M. students, Tshering says, “This is a place which will not only enrich you academically but will also prepare you with life skills. The best part of the program for me was meeting people with diverse backgrounds from all parts of the world, learning to appreciate different viewpoints, and fending for myself.”