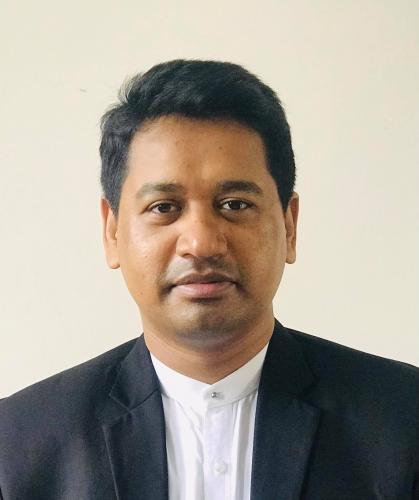 Serving as a sitting judge in his native Bangladesh for more than 13 years, Hon. Md. Harun-Or-Rashid, LLM ’19, knew he needed to gain knowledge and skills in dispute resolution to best perform his role and serve his community. After completing his LLM in dispute resolution from Mizzou Law, Judge Rashid says he is even better positioned to fulfill his role.

“My duties and responsibilities are to settle disputes and perform any other job assigned by the Government of the People’s Republic of Bangladesh, or the Bangladesh Supreme Court, by using various methods of dispute resolution,” Rashid said. “Gaining an in-depth knowledge of ADR and efficient methods of dispute resolution, the courses of the Mizzou Law program, as well as very practical-based knowledge, were required for me.”

Judge Rashid is now serving as Additional District and Sessions Judge of the 1st Court of Settlement, Dhaka, Bangladesh. Since his first appointment as Judicial Magistrate in 2008, he has also served as Senior Judicial Magistrate, Metropolitan Magistrate, Senior Assistant Judge, Joint District and Sessions Judge in various civil and criminal courts of Bangladesh. Prior to his appointment, Judge Rashid earned a Bachelor of Laws, Master of Laws, and Master of Governance Studies from the University of Dhaka. He also completed a post-graduate diploma in human resource management from the Bangladesh Institute of Human Resource Management.

Judge Rashid says adding to his already impressive educational resumé by earning his LLM at Mizzou Law was important to better advance the interests of Bangladesh society.

“Before beginning the LLM program at Mizzou Law, I had very limited knowledge about dispute resolution, especially negotiation, cross-cultural conflict resolution, and conflict management,” Rashid said. “In fact, these courses have provided me a deep insight on dispute resolution and made me more well-informed in the arena of dispute settlement. As a career judge, my responsibilities are to uphold the rule of law and the protection of the rights of litigants and victims. The knowledge of dispute resolution has helped me immensely, both in formulating policies for the settlement of disputes and their implementation.”

Choosing Mizzou Law over the many other ADR programs was a simple choice for Judge Rashid.

For those prospective students considering attending Mizzou Law for an LLM in dispute resolution, Judge Rashid says: “The Center for the Study of Dispute Resolution at Mizzou Law is one of the best dispute settlement study and research centers in the world. Any student who wants to gain in-depth knowledge in this very specialized area of study with affordable cost and who wants to come in close contact with the pioneers of this field should consider admission without any hesitation.”