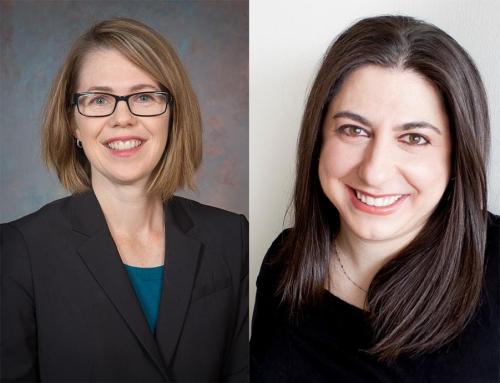 Officials at the University of Missouri School of Law are kicking off the 150th anniversary of the school by announcing two exciting new faculty hires joining the ranks of the nationally renowned faculty scholars and teachers at Mizzou Law.

Sandra Sperino, a professor at the University of Cincinnati College of Law, and Rachel Wechsler, a research fellow at the New York University School of Law, will be joining the faculty at Mizzou Law in time to begin teaching classes in the Fall 2022 semester.

“We are so excited to welcome these accomplished legal experts to our faculty,” said Lyrissa Lidsky, dean and Judge C.A. Leedy Professor of Law at the University of Missouri School of Law. “Their respective areas of expertise will be invaluable resources for our students and create exciting collaborative research opportunities for our faculty. We also expect them to be stars in our classrooms.”

Sandra F. Sperino will be the Elwood L. Thomas Missouri Endowed Professor of Law at Mizzou Law. Sperino is coming from the University of Cincinnati College of Law where she holds a faculty position as the Judge Joseph P. Kinneary Professor. Her scholarship focuses on how judges resolve employment law disputes.

Sperino’s scholarship has been cited by numerous courts, including the Third Circuit, the Fifth Circuit, the Eleventh Circuit, federal district courts, and the Supreme Courts of Iowa, Oregon, and Hawaii. Her work has been featured in the New York Times, on NPR, and in other media outlets. She is an elected member of the American Law Institute.

In 2013 and again in 2019, she served as lead counsel on amicus briefs filed in the United States Supreme Court in cases considering the correct causal standard for federal discrimination/retaliation law. Prior to entering academia, Sperino was a law clerk in the United States District Court for the Eastern District of Missouri and practiced law in St. Louis at Lewis, Rice. She graduated from the University of Illinois College of Law, where she served as Editor-in-Chief of the University of Illinois Law Review.

Rachel J. Wechsler will be an associate professor of law at Mizzou Law and an affiliate faculty member in the Department of Sociology in the MU College of Arts & Science. Wechsler is currently a research fellow at the Zimroth Center on the Administration of Criminal Law at the New York University School of Law. Her research focuses on gender-based violence and the criminal legal system. Her interdisciplinary work reflects her background in law and social science. She holds a doctoral degree in criminology and a master’s degree in evidence-based social work, both from the University of Oxford, and a JD from the University of Pennsylvania Law School.

Wechsler has a forthcoming publication, “Victims as Instruments,” in the Washington Law Review, and previous publications in the Fordham International Law Journal, the British Journal of Criminology, and Theoretical Criminology.

Wechsler previously served as the associate director of NYU’s Lawyering Program from 2019-2020 and as an acting assistant professor from 2017-2020. In this position, she received NYU Law’s Podell Distinguished Teaching Award in 2020. Previously, she was the 2015 McDougall Visiting Professor of International Law at the West Virginia University College of Law, where she taught International Human Rights Law. Prior to earning her doctorate, Wechsler worked as a litigation associate at Latham & Watkins LLP in New York.