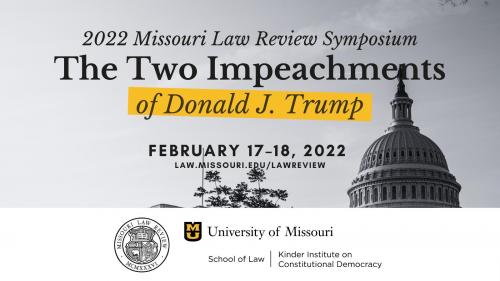 Registration is now open for the 2022 Missouri Law Review Symposium: The Two Impeachments of Donald Trump. To register for this free symposium, visit: https://law.missouri.edu/mlr-symposium/

Some of the country’s most eminent legal scholars, historians, journalists, and elected officials will assemble (virtually) at the University of Missouri School of Law on February 17-18, 2022, to discuss the two impeachments of President Donald Trump. President Trump was only the third American president to be impeached and was the only president to be impeached twice. The two impeachment proceedings and the resulting acquittals raised grave questions about the health and resilience of the American political system. The Missouri Law Review and the Kinder Institute on Constitutional Democracy are jointly sponsoring a two-day symposium at which the nation’s leading scholars of presidential impeachment, as well as journalists of the first rank and several key participants in the Trump impeachments, will consider the facts, constitutional questions, and future implications of both impeachments.