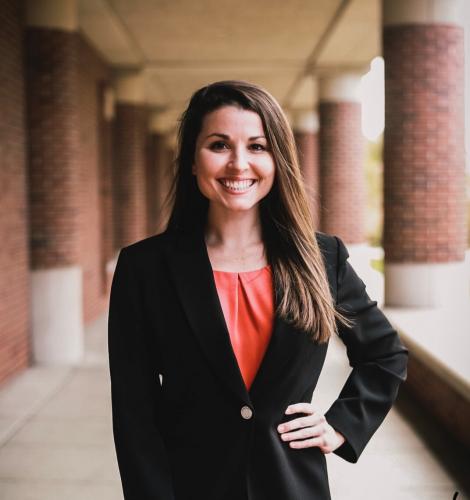 When Mackenzie Stout was nearing the end of her undergraduate degree in 2019, she had a decision to make. Did she want to follow in her family’s footsteps or cut her own path? As a senior at the University of Missouri, she had already completed one family tradition: attend Mizzou.

Both of Mackenzie’s parents and her older sister had earned undergraduate degrees from Mizzou and with Mackenzie’s graduation from the MU Trulaske College of Business almost complete, she needed to decide what her next step would be.

All three of her close family members had also gone to law school at Mizzou Law and were working as attorneys in Mackenzie’s native Kansas City. While Mackenzie was considering law school as well, she wasn’t sure if she wanted branch out and go somewhere else or stay in Columbia and attend the traditional Stout alma mater.

“I grew up always being around Mizzou,” Mackenzie said. “Living in Kansas City, we were close enough to come to football games and when my sister was here, we’d come see her often as well. So, I was comfortable with Columbia, and I love Mizzou so ultimately the decision wasn’t too difficult.”

Her decision is paying off as Mackenzie, now a third-year law student (3L) at Mizzou Law, has already locked down her early career path before she has even graduated. Once she graduates in May 2022, Mackenzie will serve in the prestigious position as a federal appellate court clerk for Judge Duane Benton on the U.S. Court of Appeals for the Eighth Circuit in Kansas City. In this position, Mackenzie will assist Judge Benton by performing legal research and sharpen her legal writing skills.

“I’m very excited work in such a prominent court and assist Judge Benton as he hears important cases across the Midwest,” Mackenzie said. “It truly is an amazing opportunity that I cannot be more grateful to get to experience.” 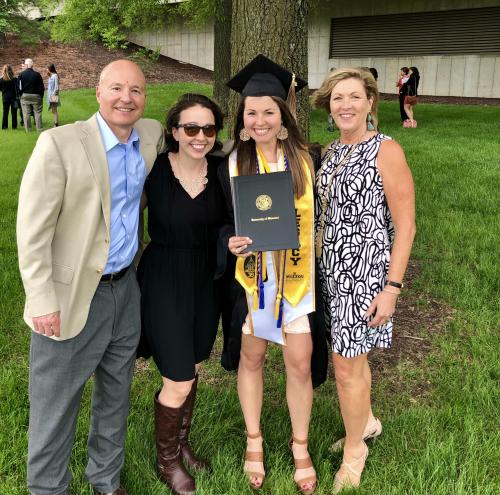 Mackenzie celebrates her undergraduate graduation with her parents David and Ann, and older sister Courtney, all of whom are Mizzou Law graduates.

After she spends a year clerking for Judge Benton, Mackenzie has already been hired by the law firm Shook, Hardy & Bacon (SHB) in Kansas City to begin in 2023. At SHB, Mackenzie will work as a civil defense attorney.

“I was a summer associate at SHB after my 2L year, and it was a great place to work,” Mackenzie said. “I’ll be working in a broad area of law that requires a wide set of skills and I’m excited to have the opportunity to build upon those skills. Plus, I’ll be able to move home to Kansas City, which is important to me as well.”

Mackenzie says she would not have been able to already achieve such exciting career opportunities without the support and training from Mizzou Law.

“The career services staff at Mizzou Law has been incredibly supportive, and all of my classes, all of my professors have thoroughly prepared me for my next steps,” Mackenzie said. “My courses allowed me to carry on conversations and networking outside of the school and all of my Mizzou Law training has given me the confidence to know that I can do the work once I graduate.”

“Mizzou Law allows me to be me,” Mackenzie said. “Even if I’m a legacy with my family all graduating from here, I have never been ‘Courtney’s little sister’ or ‘David and Ann’s daughter.’”

Mizzou Law has allowed Mackenzie to be Mackenzie. And Mackenzie is headed for great things.