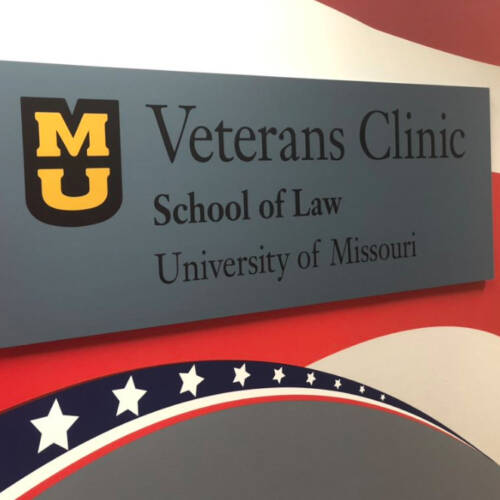 With generous donations from Susan Combs of Combs and Co. and Diana Pendleton, through her friend Dorothy Connell Berry, the Mizzou Law Veterans Clinic recently announced the creation of the Military Lawyer Transition Program (MLTP).

This new program is designed for Mizzou Law students who will be entering a Judge Advocate General Corps (JAG) program in one of America’s armed forces. There is a period of time between when law students who will work in the JAG program graduate, typically 6-8 months, and when they first report for active duty. During this time, the military does not provide pay to the student. This program allows the clinic to pay the student to work in the Veterans Clinic while they are waiting to report to their first duty station. The program will give the future JAG financial support as well as an opportunity to work on behalf of veterans in the clinic.

“I am a former Navy JAG and if I would have had this program, I would have been very happy. It really is a great program for the JAGs themselves, but it is also great for recruiting for the law school,” Mizzou Law Veterans Clinic director Brent Filbert said.

Justin Brickey, a current third-year law student at Mizzou Law who is joining the U.S. Army JAG Corps after graduation, is the first future JAG to be hired under the new MLTP. “This is just an incredible opportunity that is going to allow me to continue doing work that I really enjoy, while at the same time keep me and my son fed and housed. I really can’t say enough to express my gratitude for this opportunity and for everybody who helped make it a possibility,” Brickey said.